You know what is the Distraction osteogenesis?

You know what is the Distraction osteogenesis?

Distraction osteogenesis (DO), also called callus distraction, callotasis and osteodistraction, is a process used in orthopedic surgery, podiatric surgery, and oral and maxillofacial surgery to repair skeletal deformities and in reconstructive surgery. The procedure involves cutting and slowly separating bone, allowing the bone healing process to fill in the gap.

Distraction osteogenesis (DO) is used in orthopedic surgery, podiatric surgery, and oral and maxillofacial surgery to repair skeletal deformities and in reconstructive surgery. It was originally used to treat problems like unequal leg length, but since the 1980s is most commonly used to treat issues like hemifacial microsomia, micrognathism (chin so small it causes health problems), craniofrontonasal dysplasias, craniosynostosis, as well as airway obstruction in babies caused by glossoptosis (tongue recessed too far back in the mouth) or micrognathism.

In 2016 a systematic review of papers describing bone and soft tissue outcomes of DO procedures on the lower jawbone was published; the authors had planned to do a meta-analysis but found the studies were too poor in quality and too heterogeneous to pool. From what they were able to generalize, the authors found there was significant relapse in the vertical plane for bone, and a higher risk of relapse when there was an initial high gonial angle or Jarabak ratio (sella–gonion/nasion–menton). For soft tissue, little evidence was available regarding the vertical dimension, while a 90% correspondence between skeletal and soft tissue was found for sagittal positioning; the dental-to-soft tissue agreement was around 20%.

A 2016 Cochrane review of DO on the upper jawbone to treat cleft lip and cleft palate compared with orthognathic surgery found only one study, involving 47 participants and performed between 2002 and 2008 at the University of Hong Kong. This was not sufficient evidence from which to generalize, but the authors noted that while both procedures produced notable hard and soft tissue improvements, the DO group had greater advancement of the maxillary and less horizontal relapse five years after surgery. There was no difference in speech or nasal emissions outcomes nor in adverse effects; the DO group had lower satisfaction at three months after surgery but higher at two years. 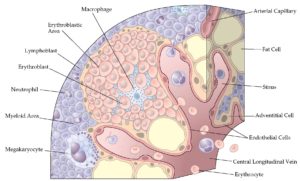 In the first phase, called the “osteotomy/surgical phase”, the bone is cut, either partially, only through the hard exterior, or completely, and a device is fitted which will be used in the next phases. In the second phase, the latency period, which lasts generally seven days, the appliance is not activated and early stages of bone healing are allowed. In the third phase, the “distraction phase”, the device, which is mounted to the bone on each side of the cut, is used to gradually separate the two pieces, allowing new bone to form in the gap. When the desired or possible length is reached, which usually takes three to seven days, a consolidation phase follows in which the device keeps the bone stable to allow the bone to fully heal. After the consolidation phase, the device is removed in a second surgical procedure.

The device that is used is usually manually operated by twisting a rod that through a rack and pinion system or the like, separates the bone; the rate of separation is carefully determined because going too quickly can cause nonunion, in which unstable fibrous connective tissue is formed instead of bone, and going too slowly can allow premature union to occur. Generally the rate is about a millimeter per day, achieved in two steps per day. The frequency of steps and how much the device is moved at each step, is called the “rhythm”. The devices sometimes contain a spring that provides tension to continually separate the bones, instead of being manually operated at set intervals.

Despite these manually operated systems there are also motorized systems like the FITBONE from WITTENSTEIN. The FITBONE is a fully implantable, motorized, lengthening and correction nail. Advantages of this device are accurate deformity correction, low scar tissue formation, and reduced risk of infection. Furthermore the patients describe the procedure as more comfortable than limb lengthening with mechanical systems.

We offer a wide variety of safe and advanced Orthopedic Implants and fixators. At the helm of the company’s operations is Mr. Vinodbhai, the Director. His enterprising skills and experience in the industry continue to play a pivotal role in the company’s growth.We are based in Ahmedabad city West Part of India.